Quality early childhood development programmes are a means of eradicating poverty and reducing inequality. In order to be able to offer quality ECD programmes, it is essential that ECD stakeholders, including staff from ECD nonprofit organisations, government, donors as well as civil society involved in ECD are properly informed.

To download a copy of some of our published journal articles, please click on the links below. 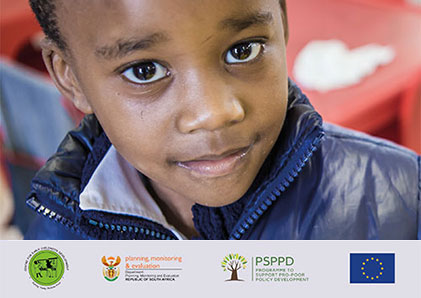 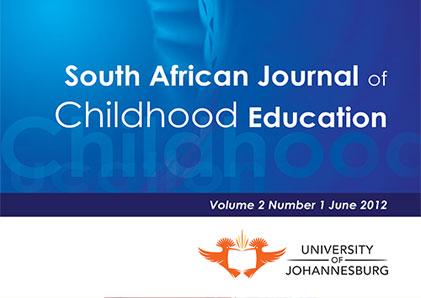 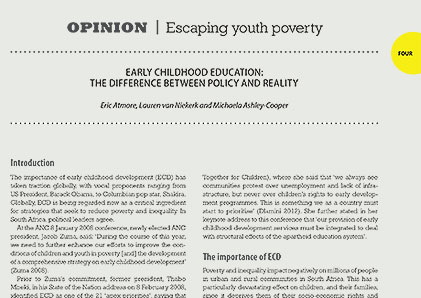 Early Childhood Education: The Difference Between Policy and Reality

This research study was conducted with the aim to describe and analyse ECD programme options, which work towards increasing access to ECD programmes and improving the quality of ECD for young children in South Africa. This research supports ECD service providers and government departments to implement the National Integrated ECD Policy approved by Cabinet on 09 December 2015, providing children with greater access to quality ECD programmes thereby reducing inequality and poverty.

By providing South African policymakers with guidelines based on empirical evidence, the quality of ECD programmes can be enhanced, and those children presently excluded can be reached. 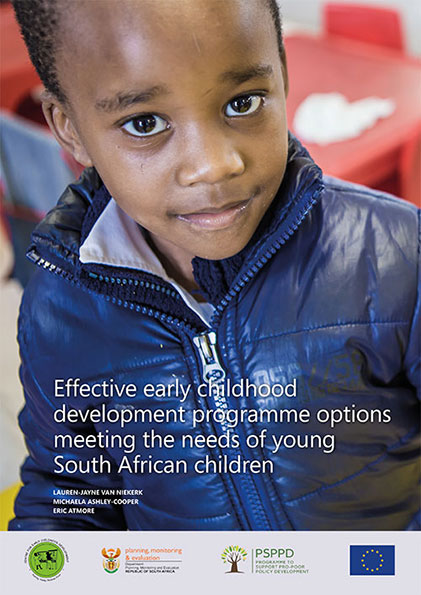 Poverty and inequality impact negatively on millions of people in urban and rural communities in South Africa. This has a particularly devastating effect on children and their families in these impoverished communities since it deprives them of their socio-economic rights and results in inadequate access to health care, education, social services and nutrition. As well as turning childhood into a time of adversity, it undermines the healthy development of the child.

Growing up in extreme poverty, wherever you live, has many consequences. The most immediate of these include a propensity for illness, stunted growth, delayed cognitive development, poor nutrition and general lethargy.

Although economic opportunities are a key factor in poverty reduction, with economic growth contributing significantly to the reduction of poverty throughout a country (May et al. 1998), it cannot alone reduce inequality in the short or medium term; several actions are needed in order to reduce inequality.

Firstly, investment in education has long been recognised as a primary route to reducing poverty and inequality. Whilst South Africa has one of the highest rates of public investment in education in the world, public spending in the critical early years is lowest. Nationally, less than 2% of government spending (Departments of Social Development and Education) is spent on children aged five and younger (Children Now, 2011).

In terms of return on investment, studies have shown that focussed investment into Early Childhood Development programmes yields an “extraordinary return, far exceeding the return on most investments…” (Rolnick & Grunewald, 2003). Investment in ECD breeds economic success, not only in terms of those beneficiaries being educated; the ECD work force being trained and supported, and children provided with quality ECD stimulation and programming, but also for the economy as a whole. This economic success is the basis for a reduction in poverty and inequality.

The above information was taken from Early Childhood Development as a Strategy to Eradicate Poverty and Reduce Inequality, an article by Michaela Ashley-Cooper, and Eric Atmore, published in the Thinker Magazine, July 2013 edition. You can access a full copy here.

In 2011, the CECD began an innovative family outreach project in the community of Gugulethu, in the Western Cape, South Africa. This home-visiting and caregiver education programme targeted the most vulnerable of families, working with caregivers with children 6 years and younger, who could not access an ECD centre.

The summary report reflects the significant impact of this programme. For a HI-RES pdf version of this visual report, click here: “Family Outreach Project – Impact Assessment“. 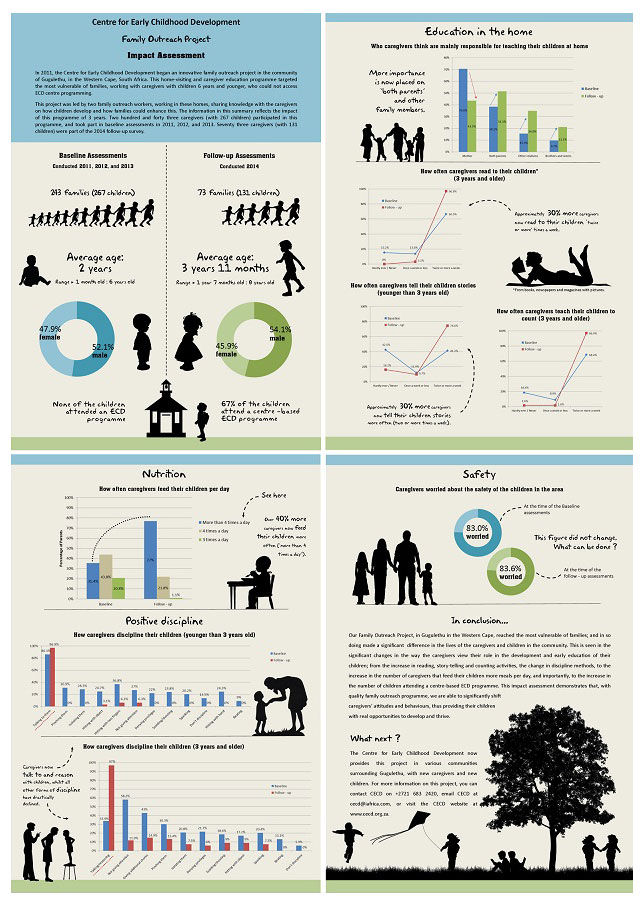 “There are currently more than 70,000 women working in ECD centres throughout South Africa; this means that over 70,000 jobs have been independently created at no cost to government, This is a significant accomplishment and something we should celebrate. However, the early childhood development sector in South Africa faces a multitude of challenges; underpaid teachers, unemployed parents, hungry children, and unsafe early learning environments are a few obstacles caregivers and children experience each day.”

This insert is taken from Celebrating those who rise to the challenges of implementing early childhood education, an article by Michaela Ashley-Cooper and Lauren van Niekerk of the Centre for Early Childhood Development, published in the Thinker Magazine: for Thought Leaders (September 2013 edition/ Volume 55).

In this article we look at the current challenges facing the ECD sector, the Department of Basic Education’s plans to increase preschool education from the current one year of Grade R to two years (as set out in the National Development Plan for 2030), and we pay tribute to the many, many thousands of women who, against all odds and despite having very little support, care for and educate our youngest children each day.

If you would like an electronic version of the article, you can download it here: Celebrating those who rise to the challenges of implementing early childhood education.

We're not around right now. But you can send us an email and we'll get back to you, asap.